News
Featured Property
20 Jan 2017
There is a home on Houghton Ridge, overlooking the golden lights of Johannesburg, that is so opulent in both proportion and finish that it has been named Gatsby – in honour of the extravagant mansion that Scott Fitzgerald’s character Jay Gatsby built to impress his Daisy. 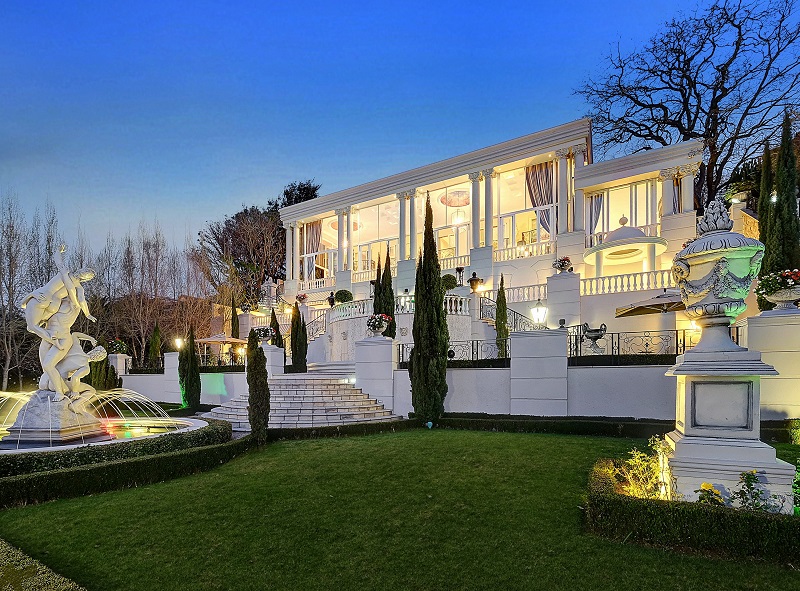 The novel is of course set in the Roaring Twenties, but both Jay and Daisy are products of an earlier time, known in the US as the Gilded Age, in England as the Edwardian Era and in France as La Belle Époque – and both the architecture and the décor of Gatsby hark back to that exciting period of peace, overt prosperity and enormous industrial progress just before the First World War.

This was the time when the wealthy in the great cultural centres of the world could afford to unashamedly devote themselves to the pleasures of music, theatre, art, dance and lavish parties - and when cameras, electric lights, the telephone, the gramophone, the automobile, air travel and many other “marvels of the modern world” were invented. 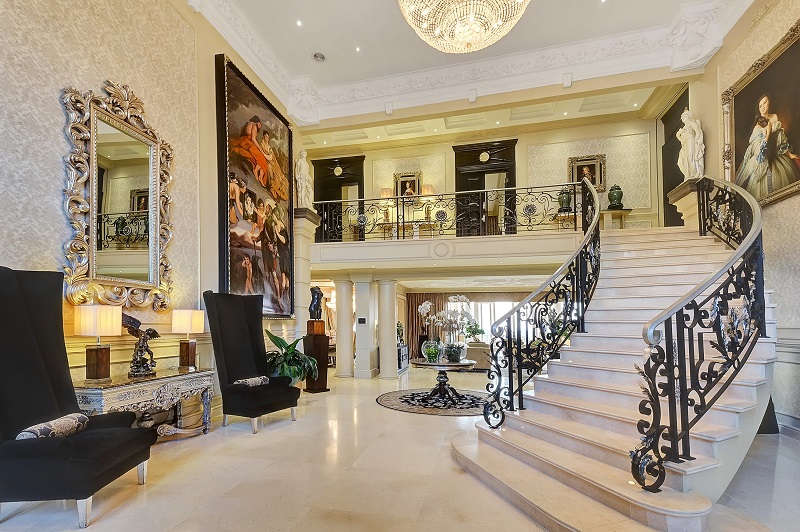 As it happens, it was also when the brash and dusty mining camp of Johannesburg began to take shape as a real city, and its own affluent class - the fantastically wealthy Randlords - began to compete with one another to build the biggest and most splendid trophy homes in the fashionable neighbourhoods of Parktown, Westcliff and Houghton.

However, Gatsby goes far beyond anything even they could possibly have imagined. Built on four levels and with cosmic expanses of glass to optimize truly exceptional views, this 2000sqm property boasts eight glamorous ensuite bedrooms and an array of sumptuous reception rooms that would not be out of place in a palace, as well as luxurious bespoke furnishings and rare art and design pieces from around the world.

Indeed, it was intentionally conceived by the Pellerade Design Group as a Palladian-style “private hotel” that could easily accommodate entertainments and functions on a royal scale, as well as more intimate family gatherings. Specifically, the brief to the group was to create an ultra-luxury home of international standard, combining classical shapes and features with contemporary finishes and the very latest smart home automation and eco-friendly technologies. 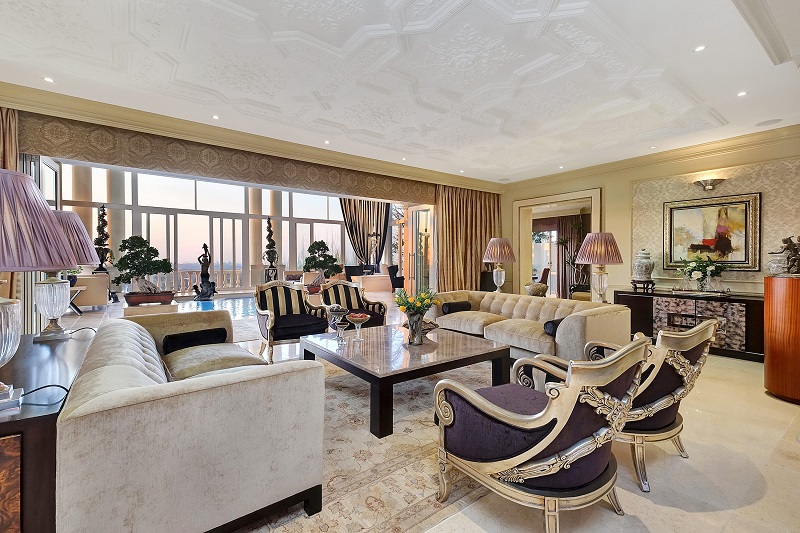 The development took more than six years to complete and was personally supervised by Group CEO Stephen Pellerade, who travelled the world to source specialised materials and finishes. He says the entrance façade is a perfect example of the fusion that informed the overall design: oversized oak doors from Argentina floating within a sea of frameless glass and flanked by classical pillars.

Boasting a private nightclub and its own spa as well as a library, gymnasium, conference facilities, heated indoor pool and outdoor training pool, this “Superhome” also features many unique artefacts, such as solid marble balustrades from Turkey and chandeliers from France, Italy and Germany. Marble and bronze statues from Argentina and France grace a dozen fountains in the formal, terraced gardens, which are based on those of the Peterhof Palace in Russia.

Currently for sale exclusively through the Luxury Portfolio® division of Chas Everitt International for R110m, Gatsby is being presented to the market fully furnished with handpicked antiques and period pieces from around the world and specially commissioned modern pieces that evoke La Belle Époque. A global selection of modern art pieces live alongside old masters and classic paintings, and sculptures include an entire collection of the Royal African bronzes by Cecilia Wilmot – the only one in SA. 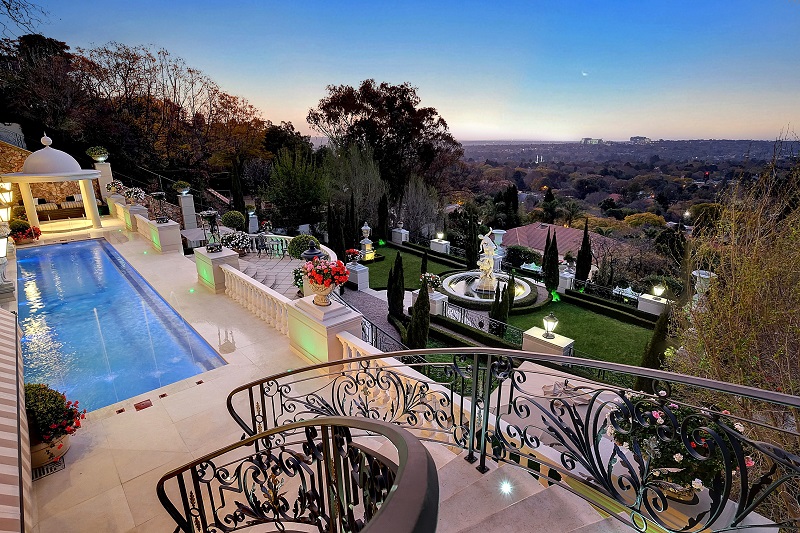 “This is a really unique property – a Superhome created to please the most discerning of global real estate investors,” says Pellerade, who has been involved in the architectural and interior design and development of palaces, penthouses and trophy homes throughout Africa, and whose clients include presidential families and African royalty.

Chas Everitt Luxury Portfolio CEO Rory O’Hagan says that Johannesburg’s heritage suburbs such as Houghton are currently enjoying a strong renaissance among both local and foreign high-end buyers and that there is especially high demand for luxury new builds as well as fully-renovated or restored trophy homes.

“Gatsby is in a class of its own, however, and we expect it to attract attention among the ultra-high net worth individuals (UHNWIs) who make up the very top echelon of property movers and shakers in SA and around the world.”

and can also be viewed at

Loading comments
More Featured Property articles
Featured Property
5 Popular suburbs in Roodepoort
It is hard to beat Roodepoort's appeal - boasting a prime location, quality schools, top-notch medical facilities, and a host of amenities within easy reach.
read more
Featured Property
Property Watch - 3 Randburg homes for sale
Randburg is the first-time buyer and young family’s dream area as it offers a broad range of affordable suburbs and a variety of properties to suit all lifestyles, from aspirant professionals wanting modern lock-up-and-go convenience to young couples seeking a traditional family home.
read more
Sign up for our newsletter
share this property article
Parktown
One of the oldest neighbourhoods of Johannesburg, Parktown lies between Westcliff and Saxonwold and is filled with heritage homes designed by the likes of Sir Herbert Baker and more.
read more