First-time buyers are loving these suburbs

Data analytics company, Lightstone, recently published a new report that has revealed that first-time buyers are entering the market in the R700k to R1,5m valuation bands as opposed to less expensive valuation bands - and they have favourite suburbs.

Lightstone’s Head of Sales, Hayley Ivins Downs says there are many reasons behind this trend, including: 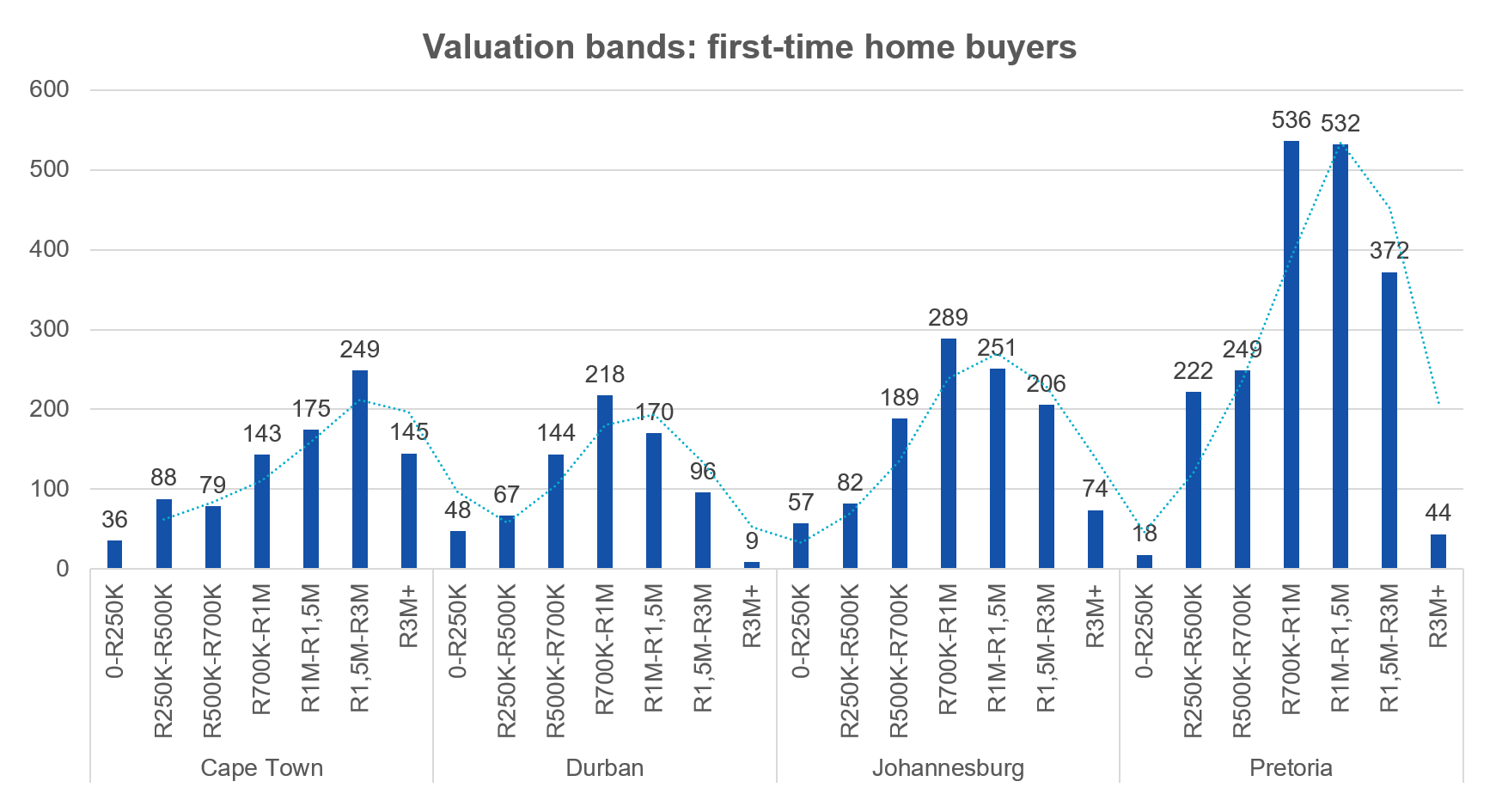 In the city-by-city graph above, the highest number of first-time buyers in Cape Town was in the R1.5m to R3m band, while in Durban, Johannesburg and Pretoria it was in the R700k-R1m band.

Adding that "while the data reinforces the historical relative premium on property in Cape Town, it clearly demonstrates how Pretoria outscored the other major centres when it comes to numbers of first-time buyers – and by some distance." 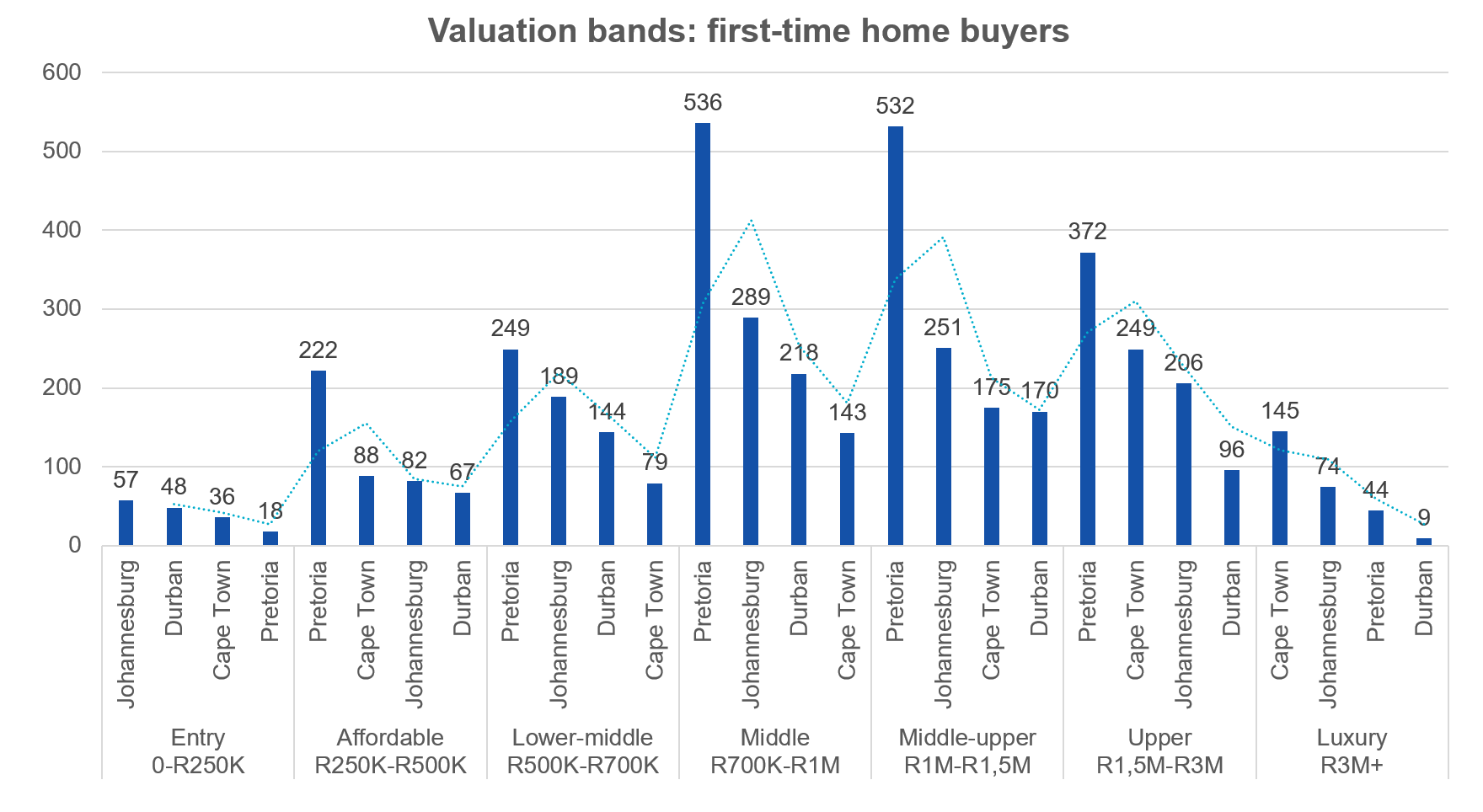 As per the graph above the concentration of first-time purchases in the R700k-R1m and the R1m-R1.5m segments is clearly evident.

Below we can see in terms of wealth segments, most first-time buyers are coming from the “Mid value” and “Mid upper” categories. 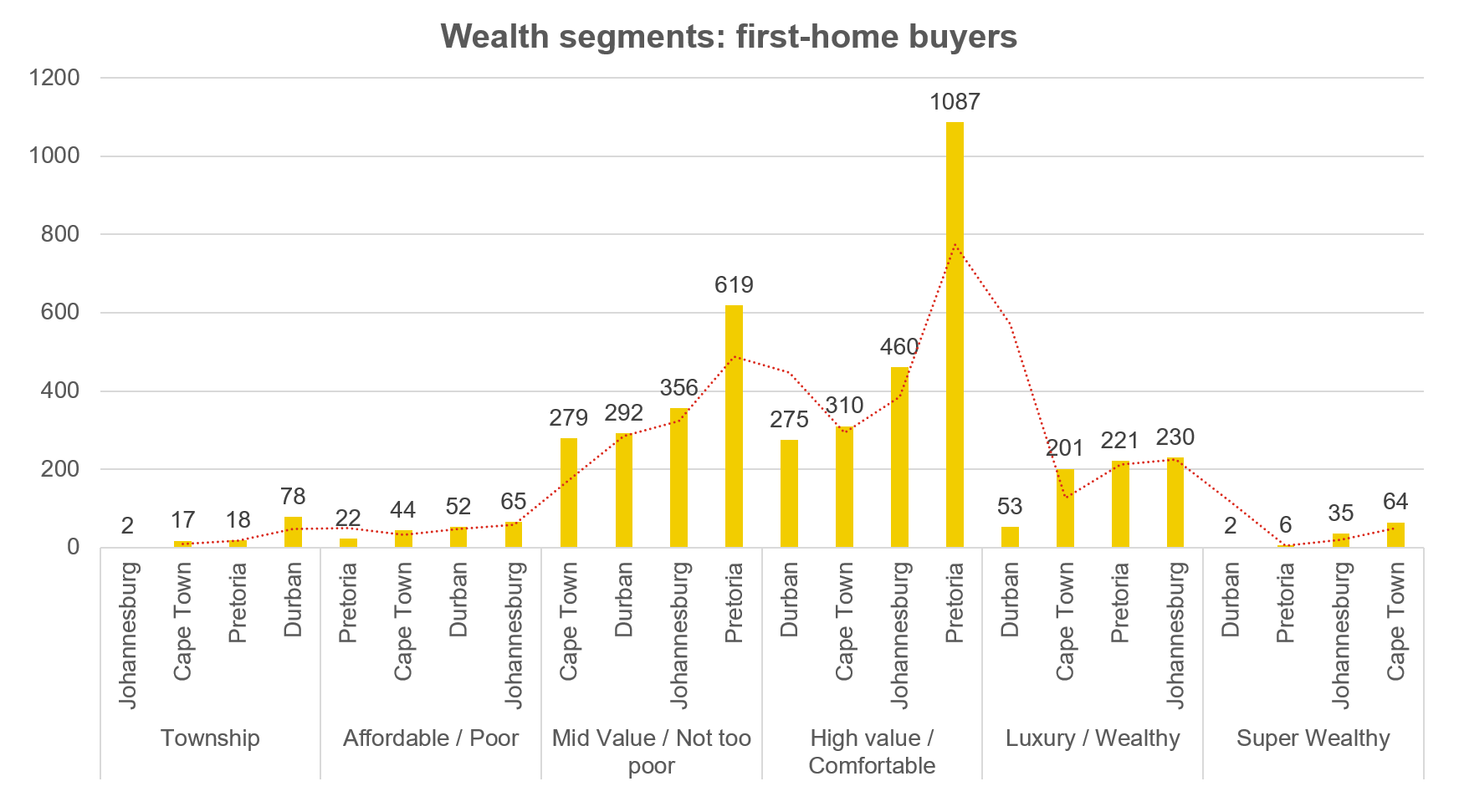 Where are first-time home buyers buying?

Data has revealed that Langa leads the way and that 75% of first-time buyers in Sandton and Midrand are black. 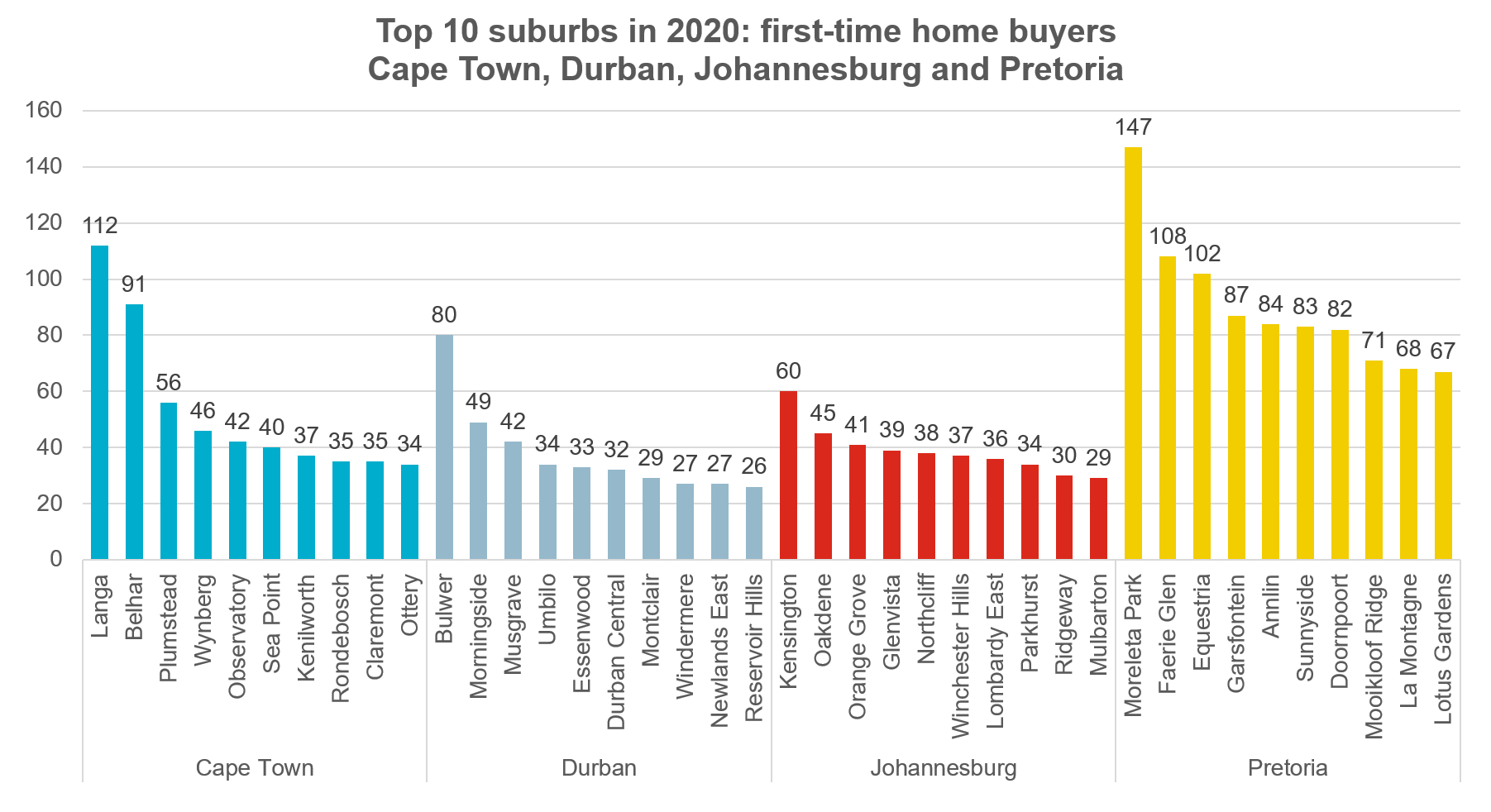 In Johannesburg, Kensington (60 purchases) directly east of the city centre was the first choice in 2020, up from fifth in 2010. Oakdene (one of five suburbs located south of the city) and Orange Grove (one of four in the northern suburbs) were next. 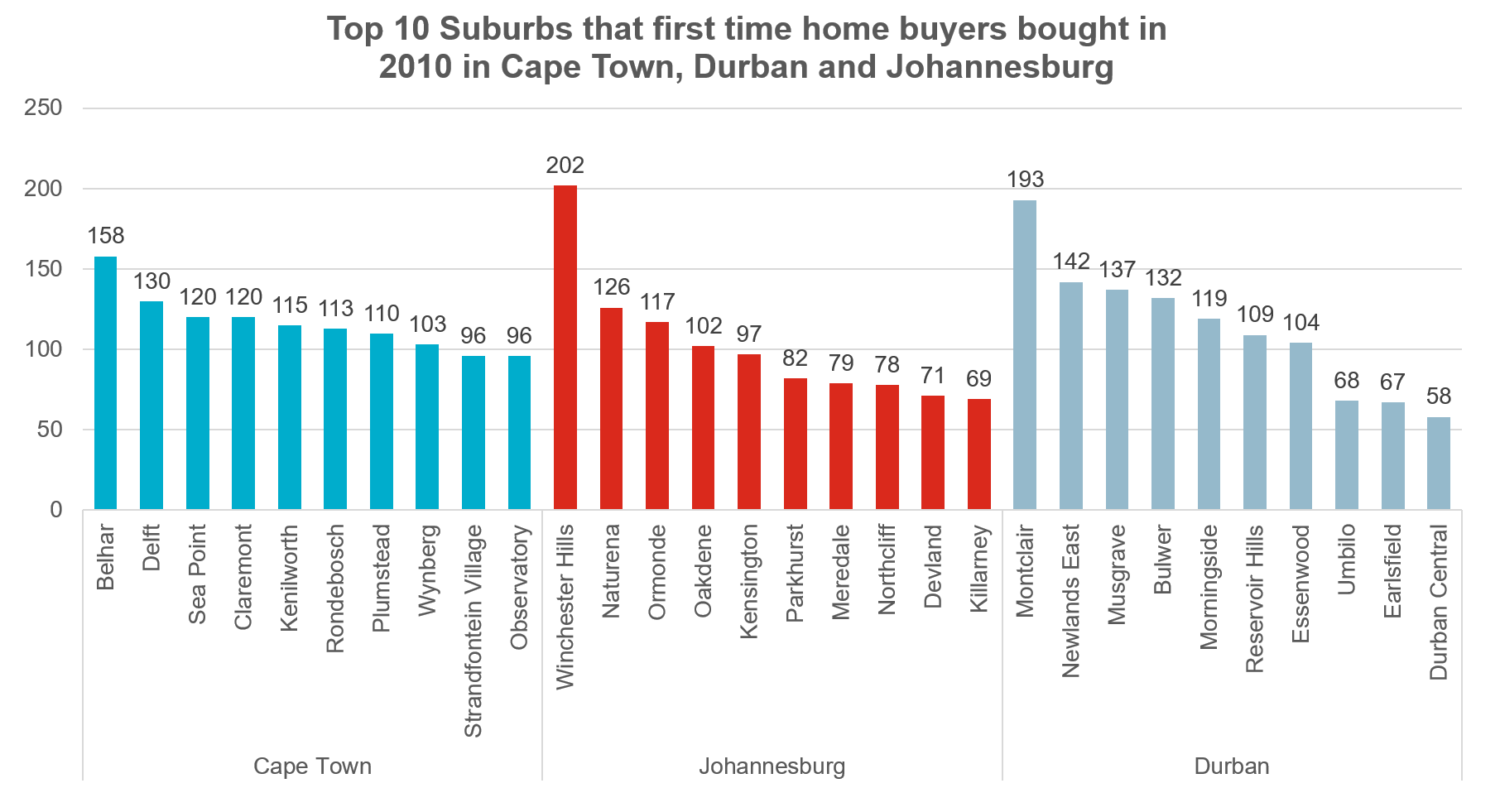 First time buyers have consistently been drawn to the same suburbs in Durban, with nine appearing in both the 2010 and 2020 top ten lists. Bulwer (80 purchases), located adjacent next to the Durban CBD, was the leading choice in the period January to September 2020.

Other suburbs to feature in both periods include Morningside, Reservoir Hills, Musgrave, Durban Central, Essenwood, Montclair, Newlands East and Umbilo. The new entrant in 2020 was Windermere, which replaced Earlsfield.

In Pretoria, Moreleta Park (147 purchases) is comfortably ahead of the other leading city-based suburbs. Moreleta Park is among the popular suburbs south and east of the Pretoria CBD, which include fellow top ten choices, Faerie Glen and Equestria.

The increased sales in Pretoria could reflect people moving into the city from surrounding rural areas as security concerns mount, changing university lodging rules, many new flats and residential developments are coming on stream, and state schools are plentiful and less expensive than many in Johannesburg. The areas where people are moving to are centrally located, with hospitals, malls and road networks within easy reach.

The impact of Covid-19 and the lockdowns are perhaps evident in the tables below, subject to the backlog being cleared at the Deeds Office.  They show total first-time purchases dropping to 2,195 in 2020 from 4,992 in 2010 – a drop of some 55%.

It is also interesting to note that first-time buyers are waiting longer to buy their first home and that women (graph below) make up the majority of first-time homeowners while men make up most of the repeat buyers. 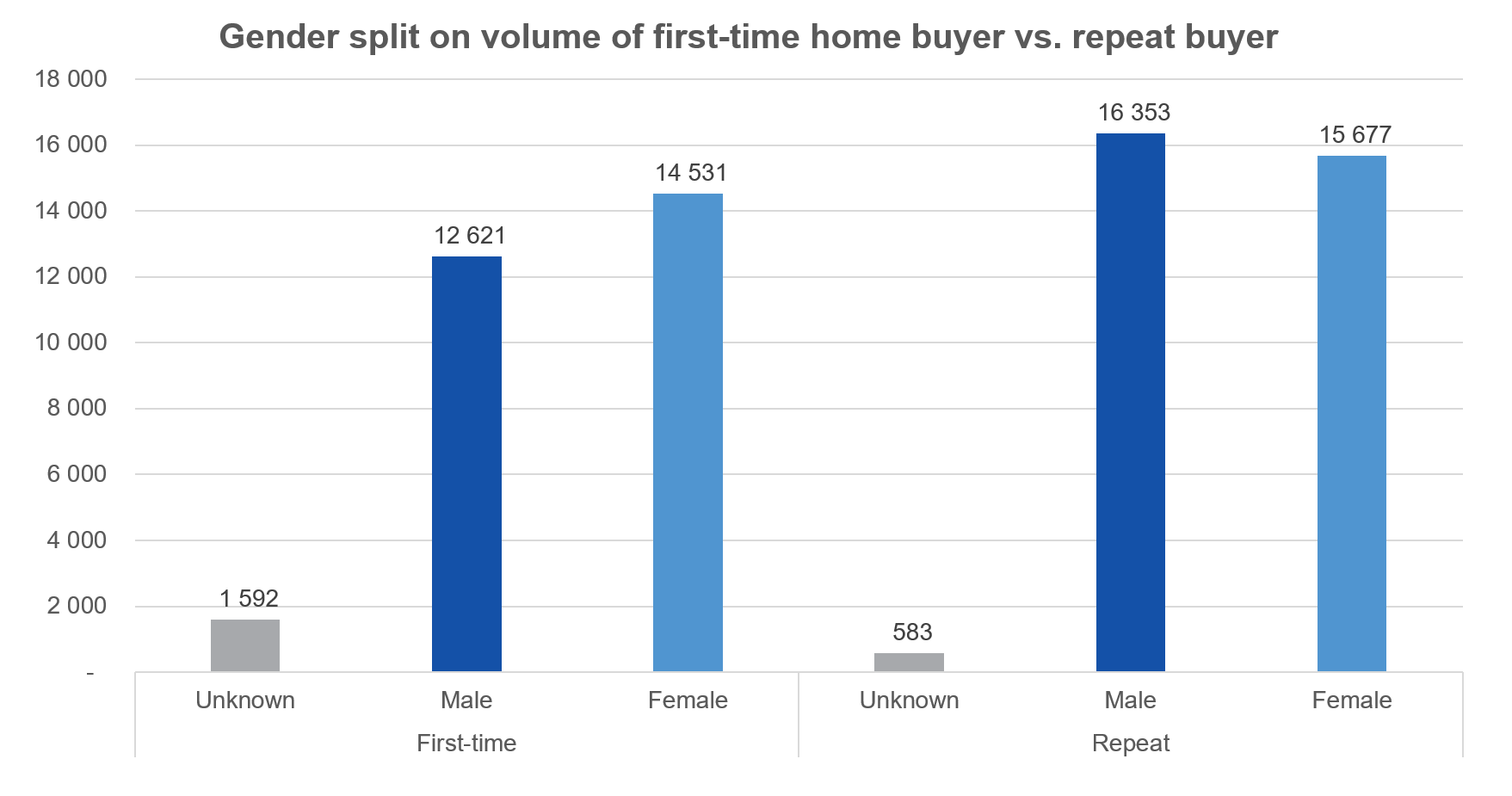 Ready to buy your first home?

buyers property market finance first time buyers covid-19
Loading comments
More Market & Opinion articles
Market & Opinion
Should I move out of the city? Here is what you need to know
The one thing COVID-19 has taught many businesses is that they can remain productive while being flexible about where employees are based. Many organisations have embraced employees working remotely, which has allowed them more freedom to choose where they want to live.
read more
Market & Opinion
Rapidly escalating municipal charges does not auger well for SA’s economic recovery
There is a direct correlation between the property market and the health of a country’s economy. When property prices go up both consumers and investors feel greater levels of confidence in the economy. Both the commercial and residential property sectors have a close correlation to business and investor confidence and the economy.
read more
Sign up for our newsletter
share this property article
Get pre-qualified
Make offers with confidence knowing what you can afford. Then shop for the best home loan
Bond Calculator
Calculate the estimated repayments on a home loan and savings with extra payments
Property Index
Get the latest property trend reports from the experts
Sea Point
This vibrant suburb of Cape Town, just outside the city centre between Mouille Point, Green Point, and Bantry Bay, has become a bustling 24-hour cosmopolitan suburb that has drawn a number of executives to settle in its beachfront high-rises.
read more
Johannesburg
Johannesburg is known by various names just as diverse as the residents - Jozi, Jo’burg, Joeys, eGoli. From its humble beginning as a mining town, Johannesburg has evolved into a buzzing urban hub of activity. From high rises dotting the skyline to leafy suburbs with sprawling properties, the city reflects the history of its growth and major events in Southern African history.
read more
Midrand
Nowhere is the old adage of “location, location, location” more prominent than it is in Midrand. This once small halfway house has grown into a fully fledged hub of activity.
read more
Your local agent
Jaco van der Merwe
For sale properties
To rent properties
Eileen Camacho
For sale properties
To rent properties
Ronnie & Elaine Smyth
For sale properties
To rent properties