Centurion property fraud on the rise

News
news
11 May 2016
It has been reported by the Rekord Centurion, that property fraud in Centurion has seen a massive spike in recent months. 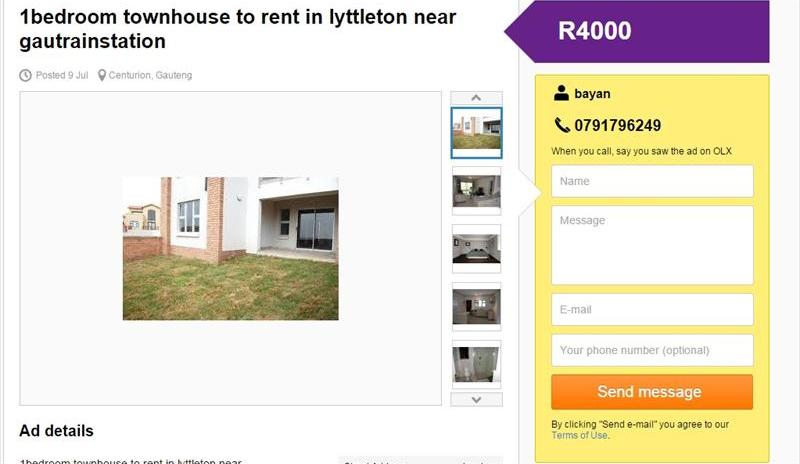 Screengrab of an older, similar scam (Image via Rekord Centurion)

In two days, eight different cases had been reported at the Lyttelton police station and according to Warrant Officer Hero Gumbu they were all online rental scams.

Gumbu said that the scams all involve actual homes in residential complexes being advertised as ‘for rent.’

“Scammers simply ‘copy and paste’ other ads and add their own details to the fake ad. One of the scammers who targeted multiple people went by the name Jazmine.”

The rise in demand for rental property in Centurion has created easy targets for these scammers, who prey on those who are urgently looking for accommodation. Victims are told that they need to pay their first month’s rent and deposit quickly as there are potential tenants who are interested in the same property.

The scammers act under the pretense of being an intermediary between the owners  and/or residents of the property in question. A number is given to the potential tenants under false claim of being that of the owner or resident, however the number belongs to that of the co-conspirator of the fraudster.

As soon as the victim calls the number, the “owner” informs them that they cannot show them the property right away as they are not in town. The fraudster then calls the person back a few days later with the request for the deposit and first month’s rent, as they will lose the option to rent to another interested party if they don’t pay quickly.

As soon as the deposit is paid, the scammer disappears.

“These fraudsters don’t use their bank account. They ask the person looking to rent to make the money available to them from their own bank account. This is why we cannot trace a bank account, because there aren’t any.”

He advised people looking to rent to be extremely cautious when responding to online rental advertisements.

“Do not ever pay the deposit or rent for a place you haven’t seen for yourself or confirmed that you are dealing with the correct people, such as registered estate agents.”

He called on anyone who suspects they might be dealing with a scammer or who has fallen victim to a fraudulent advertisement to report it to their nearest police station.

Loading comments
More news articles
news
Guidelines to securing a home loan
Many young South Africans are working hard to achieve their dream of purchasing their first home. However, the process can be challenging due to the daunting application process, which can take up to 2 years and is often enough to discourage prospective buyers.
read more
news
Things you should consider before upgrading to a new home
The thing about the property ladder is that at some point in our lives we all have reason to want to climb a rung or two higher. Sometimes, it’s because we’ve outgrown our previous dream home, or because we want to be in a better neighbourhood that’s closer to work or to schools. Sometimes it’s because our circumstances have changed, and we’re taking care of elderly parents or relatives. Sometimes, it’s just because we want a property that reflects the financial status our hard work has won.
read more
Sign up for our newsletter
share this property article
Centurion
The first thing you will notice about Centurion is that despite its ever-expanding urban landscape, there is a sense of community that many large cities lack. It is world class conveniences woven into a small town fabric to create one of Gauteng’s most vibrant up-and-coming areas. This is a family orientated area that caters for young professionals in the newer extensions, as well as retirees in the older suburbs of Centurion.
read more